Do the original turtle trading rules still work in a modern trading world?

In fact, the rules made millionaires out of normal folks with very little starting capital.

Since these rules were some of the very first ever used, it's important to take a closer look.

Let's see if they still work, how to improve them and what the modern computer code looks like.

Who Were the Original Turtle Traders?

In 1983, two commodity traders, Richard Dennis and William Eckhardt experimented to see if, like farm-grown turtles, successful traders could be deliberately raised as such.

Conducting interviews of over 1000 candidates, they whittled down their short list to just 10 lucky people.

They were called the "turtle traders".

Dennis wanted his new traders to only trade commodities such as gold.

Then he gave them exact trading rules and a chunk of his own money to trade with.

The results were amazing.  Several turtle traders made triple-digit returns in just a few years and some went on to start their own hedge funds.

Dennis’s experiment seemed to demonstrate that traders could be taught a relatively simple set of rules with little or no experience and become excellent traders.

*Fun fact, the movie "Trading Places" is loosely based on the story of these newly minted traders

Original Turtle Trading Rules: What Were They?

Writing down exact rules allows for back-testing (running those rules on past data) and see if those rules make or lose money.

But you can't do this by hand, like most newbie traders do, because your human biases take over.

You end up cherry pick examples that look like they fit your model, while ignoring all the negative examples.

Programing your rules into a computer is the solution to this problem.

The computer is a cold, hard number cruncher and will tell you if you're onto something, or if your trading ideas are a steaming pile of garbage.

So, what were the rules that Dennis shared with his traders?

Rules that look to buy big moves higher above a past number of days and rules which sell after a breakdown in price over a certain number of days.

In truth, these are some of the simplest strategies known to traders.

Simple is robust and hard to curve fit to past data.

Beware trading rules that are overly complex as they will likely not work in the future.

OK, so let's program these original turtle trading rules into a computer and test them on a commodity like gold.

Here are the results in recent times: 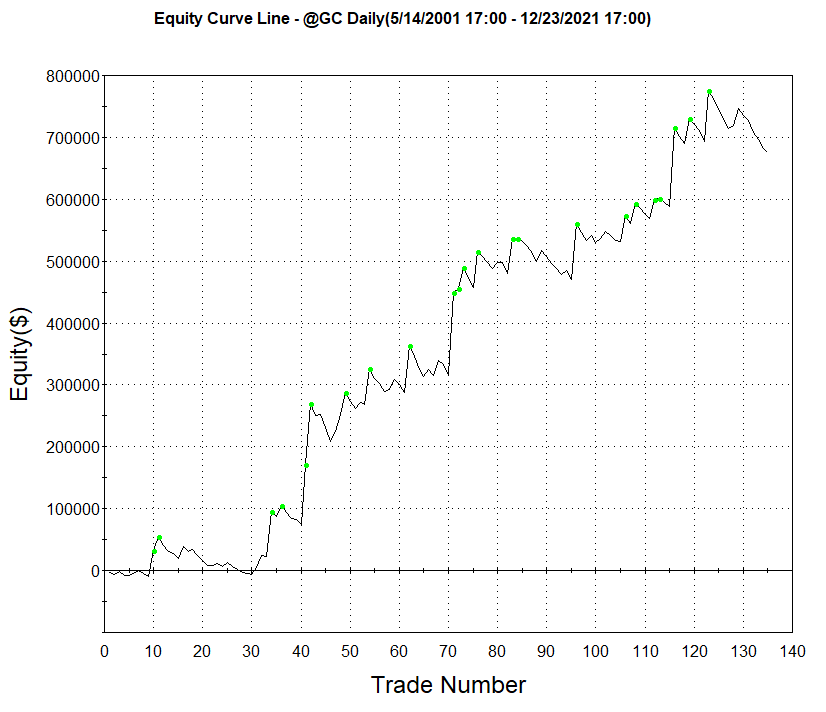 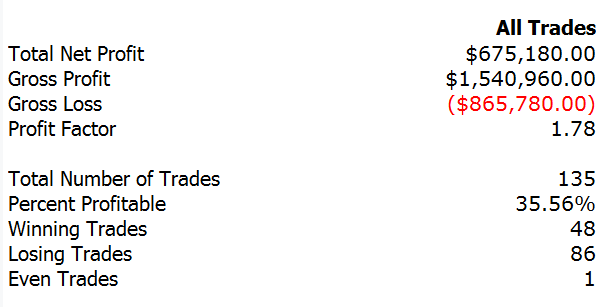 While they are still profitable, you wouldn't want to trade them.

With only 38% profitable trades, these rules would drive you bananas.

You would feel as if the rules had stopped working.

It's only a few select trades that win big - you would be constantly taking small losses, waiting for those big trends to come along.

It would be demoralizing.

But what if we tweak these rules some?

Markets do shift over time, which is why it's so important to occasionally reoptimize a strategy's parameters, keeping at least 25% out-of-sample data in reserve to test the new rules on.

This is called back-testing with out-of-sample data.

I've written about this back testing process here, which I highly suggest you brush up on.

I typically reoptimize my strategies once a year, around the holidays when I have a little down time.

So, let's take the original turtle trading rules and optimize them over the last 20 years.

Also, let's add in a way to measure trend and only trade in the direction of the trend.

This is also a super crucial topic which I've discussed in this article on the important of trend detection.

By adding in a trend filter and ever so slightly changing the number of days to buy breakouts of price and breakdowns in price we can turn the original turtle trading rules into a surprisingly simple and profitable trading strategy.

Here are the new, modern rules that work:

As you can see, we added a trend filter and only slightly changed the number of breakout days and breakdown days.

The trend filter is identical to the filter used in my QQQ trading strategy.

But let's examine these rules graphically and look at the trading statistics.

I used one subset of data as in-sample to make the system, and held back the out-of-sample data to test the rules on.

The Gold Turtle System in Action 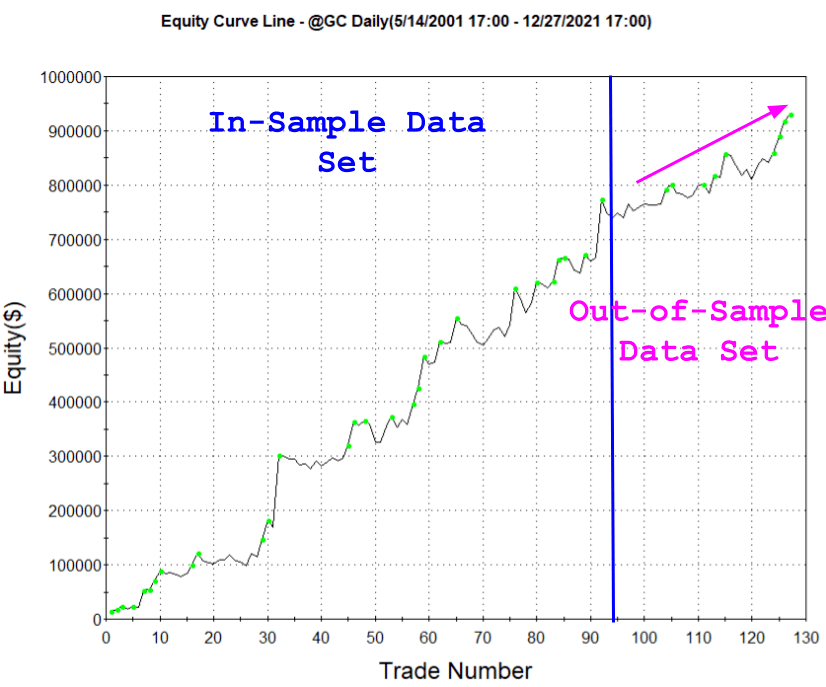 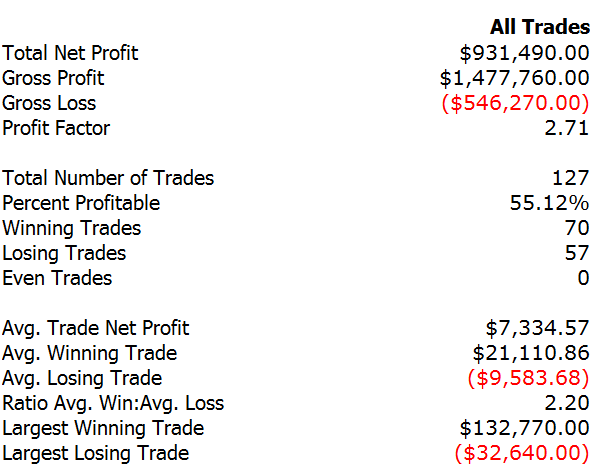 You can immediately see the difference and these new rules are quite tradable if you want to starting trading Gold with them.

Any profit factor above 2 is fantastic and this strategy comes in at 2.7.

But you will still be taking lots of little losses as you trade it with only about 55% of your trades being profitable.

This can be hard for most traders.

Most new traders want a system that wins all the time - which when you think more about it, you know deep down is impossible.

Yet I see countless traders hop from one strategy or stock picking service to another thinking that one is going to suddenly make them rich.

But as the strategy above shows, you must have patience.

Wealth creation is a process, not a one-time event.

As you can see, the original turtle trading rules work...slightly.

But still, it is very impressive that they work at all in the modern world.

Markets can shift drastically over time, and these original rules show that some commodities, like gold, are still turtle rule friendly.

None-the-less, it's the slightly tweaked rules that really make for a tradeable strategy.

One you can use today to start trading the yellow metal. 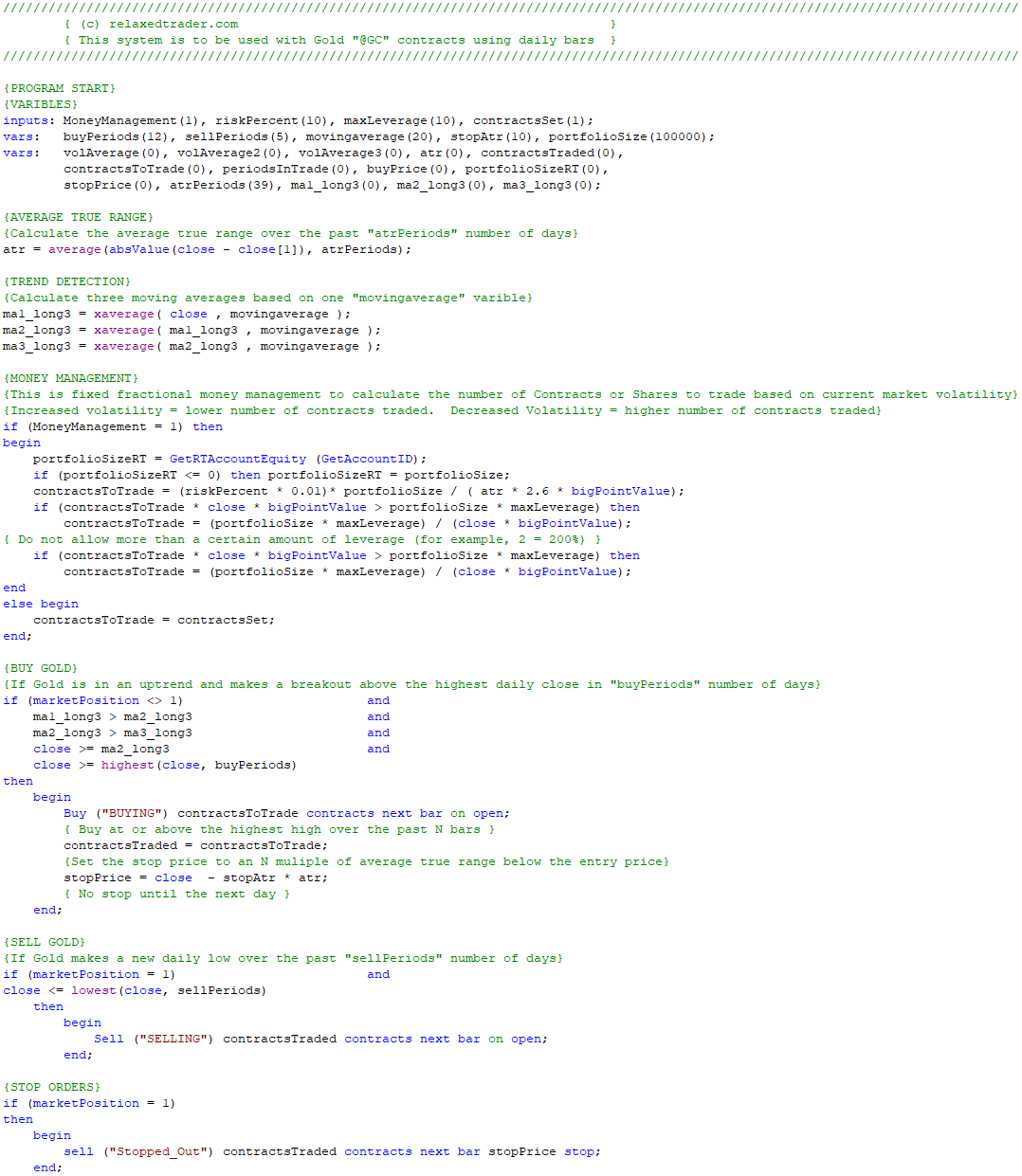 Code for the Modern Turtle Trading Rules for Gold